How Some Cleveland Browns Jerseys Tuned Me into His Voice 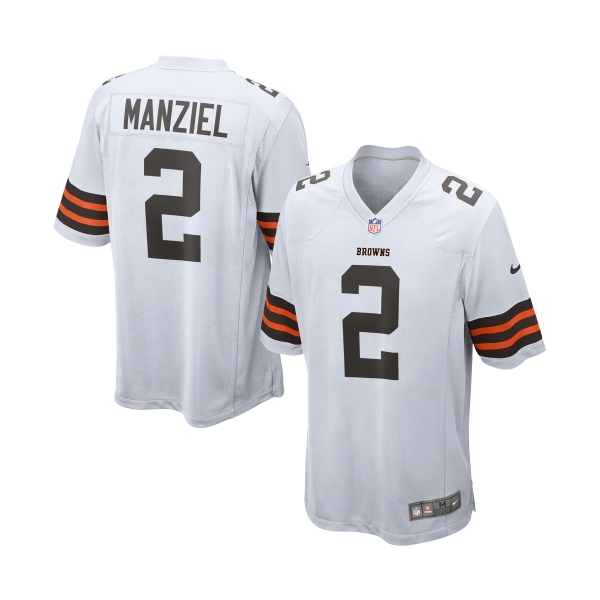 I love Jesus and have seen Him do many amazing things in my life. I have heard Him speak through His Word and in my quiet times with Him. What I was really desiring was to hear His voice more on behalf of others as I go about my day doing life. Call it prophesying, encouraging, building up, whatever- I believe the Lord wants to use His children to build one another up and to share in the love of the Father.

So, it is a Thursday night and I had to run a few errands with my family after dinner. I was exhausted from a busy week and admittedly not in the best mood. We had made a few runs and then headed over to Dicks Sporting Goods to buy my son some soccer cleats. We grabbed them quickly and headed up to the line to pay.

We jumped into a long line and I quickly glanced over to see a mom and her kids ahead of us. She placed 4 Johnny Manziel Cleveland Browns football jerseys on the checkout counter. I looked at them and in a fraction of a second a thought passed through my mind, “buy her stuff…”

Now, you have to know a few things about me. I live in Cincinnati and I am a diehard Bengals fan. We really do not care much for the Cleveland Browns down here, let alone their newest quarterback. And, although we can be a generous family, we are not in the business of paying for other people’s sporting goods. And, did I mention I was kind of a grump this evening? So, as quick as that thought flew in, it flew out.

It seemed like eternity went by when the checkout guy said “sir, your up.” As he called me forward, he reached out and put his arms around the women’s jerseys and pulled them off to the side. I looked over at the women and unbeknownst to me, when she went to pay for her stuff, her card was declined… I looked up and her children were surrounding her, upset and embarrassed as she frantically dialed the credit card company.

In that moment, my world stood still and time stopped… I quickly recalled the passing thought just 5 minutes earlier to “buy her stuff” and now it was confirmed when their credit card was rejected. It was the Lord who told me to “buy her stuff” because He knew what was about to go down.That passing “thought” I had was actually HIS voice. I actually have those types of “thoughts” all the time. God was telling me that the seemingly random passing thought through my mind, was Him..

I pulled myself together and nervously approached the women. I said, “excuse me mam, I’m a Christ follower and I believe God wants me to buy your stuff. She said “no, I can’t let you.” I said God wants to bless you, I’m buying these jerseys. With that, her children gathered around her and all cried while hugging their mom. I was fiddling with my credit card and looked up to see the family in quite the embrace. I was starting to wonder what was going on, were they like the biggest Browns fans in the world or something? A moment later, the woman approached me and hugged me. She said, you have no idea what this means to us. She and the kids were heading to a funeral that next morning and they are wearing the Brown’s jerseys in honor of the deceased…

It rocked me to the core…..God just touched this woman in the midst of her pain and He let me be a part of it. And even more so, I heard HIS voice……the voice of my Father in heaven. Needless to say, this epiphany around hearing His voice launched me forward significantly. This gives new meaning for me for what Paul was saying in “we take every thought captive….” I always took this to mean when a bad thought comes in, grab it and get rid of it. But some thoughts are His and we are to be obedient and act upon His words. Sometimes they sound like, “call Eric and tell him what a great dad he is, text Kristin with this scripture, pray for that women who needs healing in her back, share my love with that person, and so on.”

Now when I go about my day it is an adventure. “Ok Lord, who do you want to love on?” “What are you doing right now in this place? What do you think of this person? How can I share your love?

This is for all of us, we all get to hear His voice. It was Jesus who declared,”my sheep listen to my voice; I know them and they follow me.” You are His sheep, listen for that voice and act on it. Next time you have a passing thought, pause…does it align with His word? Does it build up the body? If so, act on it and watch God speak through you. Faith is spelled R-I-S-K, step out a bit on the limb and trust that your Father will not let you fall. He is not only speaking to you but desires to speak to others through you.

My heart is to help all His children hear His voice. If you want some help and encouragement in this area, reach out to me at Activation Ministries.

If you would like to know more about Jason or make a financial contribution to his ministry, Click Here.