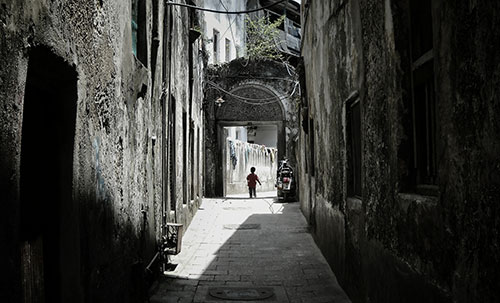 “You are different. Never have I met a person with kindness inside of them.” Sammy didn’t speak great English but I knew he was seeing Jesus in me. I was there as a businessperson and I expected the life, love and light of Jesus within me to be a witness. However, there was a threat if certain ones knew I was a Believer. “Tell me about what you believe?” He was genuine, openly interested. My hesitancy unintentionally provoked even greater curiosity with Sammy. I knew it had to be him asking the questions.

In time we started talking about Jesus, the true Savior, eternal life, and reconciliation with God. I was amazed at how much ground we covered. There was one long conversation we had walking through the park in the evening. Most of the community strolled at dusk. He was intent on the topic and full of questions, but conscientious that we not be overheard. I knew he went away pondering it all but what I wasn’t prepared for Sammy was going to a religious zealot in the local community to ask him about our talks. Nor did I know this man was his best friend.

In this nation the religious control is dominant. Their view of Christianity is that missionaries steal the salvation and identity of the people through conversion to Christianity and that people are nothing more than a project. “Did you come to my nation to proselytize me?” His eyes were blazing with suspicion. I felt a certain nudging of the Lord and thought to be careful what I said, that it was being recorded. To my surprise, weeks later Sammy told me how he secretly records conversations. It was confirmed.

“Sammy, I am a businessperson. And, you are the one who has been asking me about Jesus. Remember, I was not open to tell you at first.” I felt surprisingly calm. I didn’t know that’s what I would say but I saw the wisdom in how it was playing out. His face and intensity level changed. He knew I was a businessperson and saw that I was contributing to the country economically. He respected me for my hard work. And, after he thought about it, that he was the one asking me about Jesus the cloud of fear lift from him. The friendship was not a deceitful sham and he was not my project, he was my friend. I watched his heart reopen as he realized the truth, and the conversations continued on.

After this particular conversation, truth be told, I was afraid. I didn’t know previously who his best friend was or if Sammy would turn me in. It was risky. My hope was in God alone.

During another conversation Sammy asked questions I did not know how to answer. He was asking a spiritual question but trying to reason by intellect. I knew no way to explain it. “I understand your question, Sammy, but I cannot explain the matter. It won’t make sense to you until you come to Jesus and His Spirit lives inside of you. It’s like this… I took the red pill.” Quite honestly the movie reference to the Matrix even shocked me. Where did that come from?! It was brilliant and effective. Sammy immediately understood. Here was God again helping me navigate the unexpected.

The following weeks it was coming to the point of Sammy’s crisis. Would he follow Jesus? The pressure wasn’t from me, but he felt it. He still feared being deceived, and his strongest defense was his intellect. “If I follow Jesus and this way you talk of, I would lose everything… my standing in society. My children will be outcasts at school. My ex-wife may try to take them from me. My family will feel betrayed and may shun me. The government will give me problems. It will be a hard life. If I were a younger man without children, that would be one thing. But to make this decision now? ”

“You are right! It will not be easy. Coming to Jesus is a big deal.” He was shocked that I didn’t try to sell him a line that life would be peachy. It quieted him. Believe and surrender to Jesus, be reconciliation with God, and enter eternal life—or—choose the comforts of the status quo, keep acceptance in society, and choose death by denying the Savior (though he reasoned this wasn’t the truth).

I wish I could say Sammy gave his life to Jesus, but he has not yet. The conversations stopped, but the seed was sown and I know he will not forget. Experiencing the wisdom of God, His covering, His leadership, His answers when I didn’t know what to say, and even the posture of business and friendship that was necessary to defeat the accusations and appeal in truth—it was all remarkable. The ways of God are beyond me.

*Due to sensitive nature of this fieldwork the names are changed and the location and details are intentionally ambiguous so as to protect the security of the people and endeavor.

If you would like to learn more about Taylor Daniels or give to this ministry, Click Here.